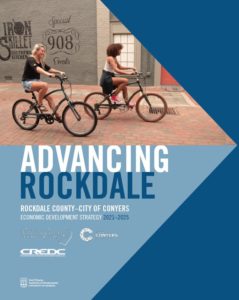 In early 2020, Rockdale County, in partnership with the City of Conyers and the CREDC, launched a formal effort to develop a new economic development strategy for the community. The group engaged the University of Georgia’s Carl Vinson Institute of Government to support the project and developed a steering committee of local leaders to oversee the project. This report summarizes the findings of the steering committee and details the new strategy for advancing economic development efforts in Rockdale County.